Ooh what a week it has been! As Splenda’s Signature Chef I have the pleasure of developing a number of recipes and representing the brand on various occasions. Thus far these ‘occasions’ have taken the form of photo shoots and a live television tapings! I’m rounding out two days of photo shoots for Splenda and a satellite media tour for them as well. I had tons of fun, learned a lot, and had the chance to reunite with my favorite wardrobe, prop, and make-up teams. Aren't these the best looking muffins? Each one is a little blueberry bundle of perfection.

The photo shoots commenced at Gary’s Loft in Williamsburg, Brooklyn – a beautifully designed warehouse space, and went really smoothly. The Splenda and Golin Harris teams were so attentive and on their P’s and Q’s that both days went by in a breeze!

6AM the following day, the satellite media tour for ‘Americas Favorite No Calorie Sweetener’ commenced. Diet Coke in hand, I put on my best smile and interviewed (via satellite) six hours straight with over 20 stations across the U.S.! The day ended with quick interview with Better TV. Around 2PM I was whisked off in my chariot  (it was actually a cab… but it might as well have been a chariot) back to my home in Brooklyn. Just another day in the life of Katie Brown… Getting 'mic-ed' at the Better TV interview. 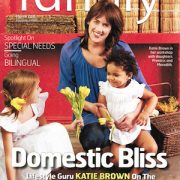